Above, a digital collage showing two castings of the same design. The very top reproduces Benjamin Krebs Nachfolger’s product number 333, the 28pt size of the foundry’s Moderne Steinschriften typeface. Krebs first advertised its Moderne Steinschriften in 1865. That was one of the nine or more original sans serifs the Krebs foundry pro­duced before 1900. [Click here to see the collage in a larger size.]

The letters in each line of the collage are the same. That is the premise you will need to entertain to understand the information I present below. If you are not sure the letter­forms in these lines match, I am happy to try to convince you.

Most of the collage above is from the top-middle section of a fold-out broadsheet from Ferdinand Theinhardt’s foundry. It ac­com­pan­ied an 1885 issue of the Archiv für Buch­drucker­kunst und verwandte Geschäfts­zweige. The text on the broadsheet reading “Ferd. Theinhardt, Schriftgiesserei” was printed from the foundry’s product number 613, the 28pt size of the typeface it sold under the simple name “Grotesque.” Ferd. Theinhardt’s Gro­tesque was cast from duplicate matrices of Krebs’s Moderne Stein­schriften. More than 30 other foundries in Austria, Bohemia, Germany and Switzerland alone would sell sizes of Krebs’s design by the end of the nineteenth century.

You may notice that the text is looser in the second line. Justification – or what we might refer to as “spacing” today – was almost certainly the responsibility of each foundry casting a design. Matrices made for foundry-type casting machines do not contain “side-bearings” or spacing information. Krebs either cast its original version of this size with less space on the left and the right-hand sides of most letterforms than the Theinhardt foundry, or Theinhardt’s compositor added spacing material between many of the sorts manually. Some type designers I’ve spoken with have been shocked that spacing may not have played the same role in the nineteenth-century punchcutter’s process as it would in late-twentieth and early-twenty-first-century type design.

A foundry would have a reference font for each size for the typecasting workers to compare widths of new sorts against as they cast. I speculate that when one foundry bought duplicate matrices of a design, they only received matrices (either already justified or as unjustified “strikes”) but would have to assemble their own reference casting. When a foundry copied another firm’s products via electrotyping, it must have had sorts from the original font – the very nature of the process required this. In those cases, the copying-foundry would have already had a “reference font” it could use for spacing. That is my explanation, anyway.

This post represents the formal conclusion of my three-year research project on the sans serif typefaces sold in German-speaking Europe during the nineteenth century. I am pleased to share my results. Although this post delivers much of the information I’ve accumulated, it is unlikely to be my last on the subject.

In the text below, I use the term designs rather than typefaces. Some designs were exclusive to a single foundry. Others were sold by dozens at the same time. Although some foundries carried all the type sizes ever cut for a specific design, others might only sell a single font from the design’s range. What was presented in a foundry catalog as a typeface was oc­cas­ion­ally a collection of multiple designs.

For instance, the Bauer’sche Gießerei probably began selling a typeface it called Breite Grotesque-Versalien in the early 1890s. That typeface combined fonts from at least four different sources. The type sizes from 5 through 20pt were either cut in-house at the foundry or were commissioned by the foundry. The larger sizes seem to combine at least three pre-existing designs. According to Nicolete Gray, at least one of those was already sold by the London-based Figgins foundry in 1847.

When I began this research, my goal was to determine how many sans serifs each foundry in German-speaking Europe sold during the nineteenth century. I also hoped to determine the percentage of each foundry’s Grotesks that were “original.” In a future post, I may present the most widely-distributed designs, sorted by the number of foundries carrying each one.

In this project, I limited myself to the foundries’ Latin-script designs only. While I did include large-sized fonts in my tallies, I excluded designs explicitly marked in type specimens as being made from wood or brass. Designs published after 1900 are not included, either. In an older post, you can find a list of archives, libraries, and museums whose collections I consulted. Feel free to compare the totals below with my database of nineteenth-century German sans serifs. 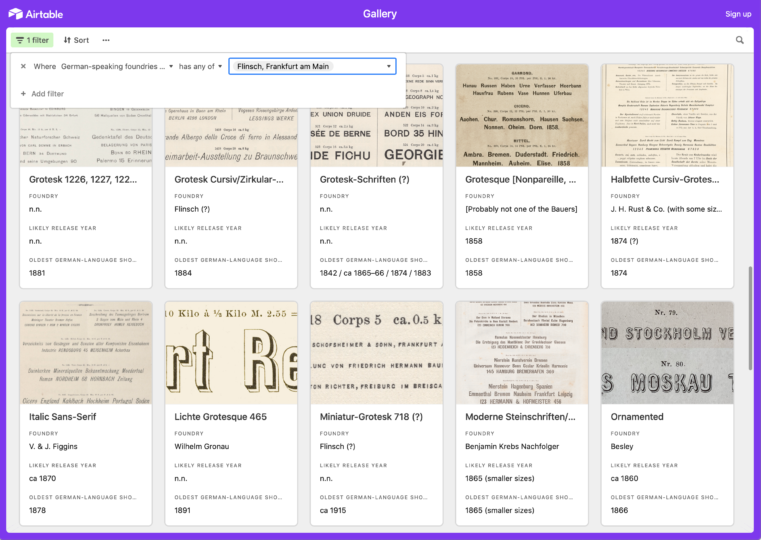 Filtered results for ten of the 46 sans serif designs the Frankfurt-based Flinsch type­foundry sold during the nineteenth century. Click to enlarge.

Based on the type specimens I examined between April 2018 and March 2021, I have compiled the following totals for foundries in Austria, Bohemia, Germany, and Switzerland:

Above: Cropped scan of Blatt No. 275 from Wilhelm Woellmer’s Schriftgiesserei in Berlin showing the 28, 36, 48 and 60pt sizes of the Fette runde Grotesque typeface. Together with a sheet showing the typeface’s smaller sizes, this accompanied the December 1887 issue of Archiv für Buchdruckerkunst und verwandte Geschäftszweige (vol. 24, no. 12). The typeface was one of the foundry’s original sans serifs. A line of small type at the bottom of the image explains that this was an original creation and that matrices of the sizes were available for sale. I have not found this design in the nineteenth-century specimens of any other German-speaking foundry. Perhaps a foreign foundry placed an order.

For the following foundries, I examined too few specimens to be able to make helpful conclusions:

Schelter & Giesecke’s Antiqua-Zierschriften, numbers 224, 262 and 246. I do not know the source of this design – it may have come to Germany from abroad. Eduard Haenel’s foundry was the first to show fonts in this style in German-speaking Europe during the 1850s. About fifteenth other German foundries carried this design, although everyone was not necessarily selling these three sizes. Scan from Schelter & Giesecke’s 1899 catalog.

The percentages of original sans serifs each foundry sold do not provide much infor­mation on their own. Of the foundries listed above, each sold products it did not create itself. Yet, the ratio of internal to external designs sold could be very different for each foundry when it comes to other styles of type, ornaments, border-printing elements, and vignettes. My figures could be used as a starting point to investigate and compare more products from specific foundries. For instance, even though Böttger did not create any of the nineteenth-century sans serifs it sold, how do its other products’ origins compare? Schelter & Giesecke had the most original sans serifs in its nineteenth-century product palette. Perhaps that should be no surprise. Around 1900, Schelter & Giesecke may have been the largest typefoundry in Germany. In terms of original sans serif percentages, Wilhelm Woellmer’s foundry could read as the most-creative firm. It sold fewer Grotesks in total than Schelter & Giesecke, but a higher rate were in-house creations. However, the question we should ask is whether these data points apply to those firms and their products as a whole.

Many of the more than 400 designs I collected during my research originated outside of German-speaking Europe. So far, I have found examples from British, French, and United States foundries. Through the end of the nineteenth century, German foundries added new types from Britain and the U.S. into their product ranges. The mere appearance of foreign designs in German catalogs is not proof of international business relationships in-and-of-itself. Yet, the number of Caslon designs Flinsch added to its product palette could indicate a possible connection between those two foundries. In general, I find this a ripe topic for future researchers to investigate.

I was not able to locate specimen sheets and catalogs from every foundry operating in Austria, Bohemia, Germany and Switzerland during the nineteenth century. Never­the­less, I suspect that my results offer a nearly com­plete image of the breadth of Grotesks sold in that network during this timeframe. I find it unlikely that a large catalog from an untallied foundry carrying 20 unique sans serif designs is present in any existing col­lec­tion. Never­the­less, I am certain that my data set will con­tinue to expand with time, as I am able to view additional specimens kept in yet-un­visited collections.

From Vienna to Philadelphia (and further afield, too): Halbfette Cursiv-Grotesque Previous Article
Victor Hammer and Gebr. Klingspor Next Article