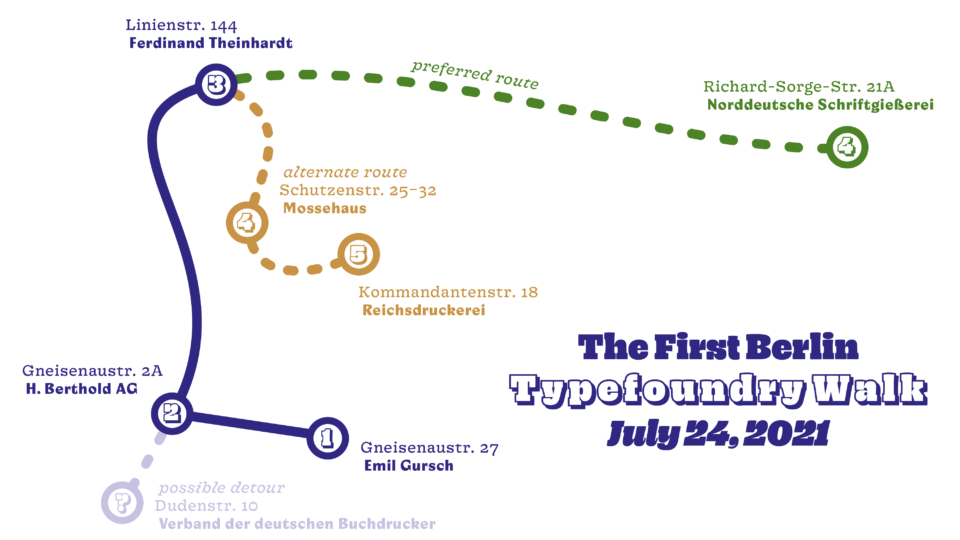 Several factory buildings from the time of industrial type-production are still preserved. These typefoundries and their products shaped the national printing industry during the 19th and 20th centuries. They continue to influence designs made by the international typography community today. On July 24, 2021, as part of the project Die Sicht­bar­machung des Sicht­baren – Berlins typo­graf­isches Kultur­erbe im Open Access, I organized a walking typefoundry tour to four of those foundries’ sites. Since the courtyards are often accessible during the week during business hours, it is easy to repeat this typefoundry tour yourself.

To contribute to their preservation and accessibility – and to make Berlin’s rich typographic cultural heritage more visible for researchers, people in the creative industries and the general public – the Open Access project will digitize type specimens from all Berlin-based type-making companies with items from three collections. These are the Stiftung Deutsches Technik­museum Berlin, the Staats­bibliothek zu Berlin and the Staat­liche Museen zu Berlin’s Kunst­bibliothek. The Open Access project encompasses the four typefoundries mentioned below, plus specimens from firms that have left no preserved buildings, like Eduard Haenel’s and Wilhelm Woellmer’s typefoundries. I’m part of the scientific advisory board for the project and you can read the original German-language version of this tour here.

But enough introduction – let’s start our typefoundry tour in Kreuzberg:

Established in 1866, the Emil Gursch type foundry built a factory building around 1900 in what is now in the interior courtyard at Gneisenaustraße 27. Before that, the foundry had operated from various other locations in today’s Kreuzberg district. Gursch’s foundry building was built in what could be called a typical turn-of-the-century Berlin factory style. Even if the building is not unique, its porcelain tile facade – in white with green accents – makes it stand out. The structure is probably the most beautiful of the capital’s surviving typefoundry buildings. 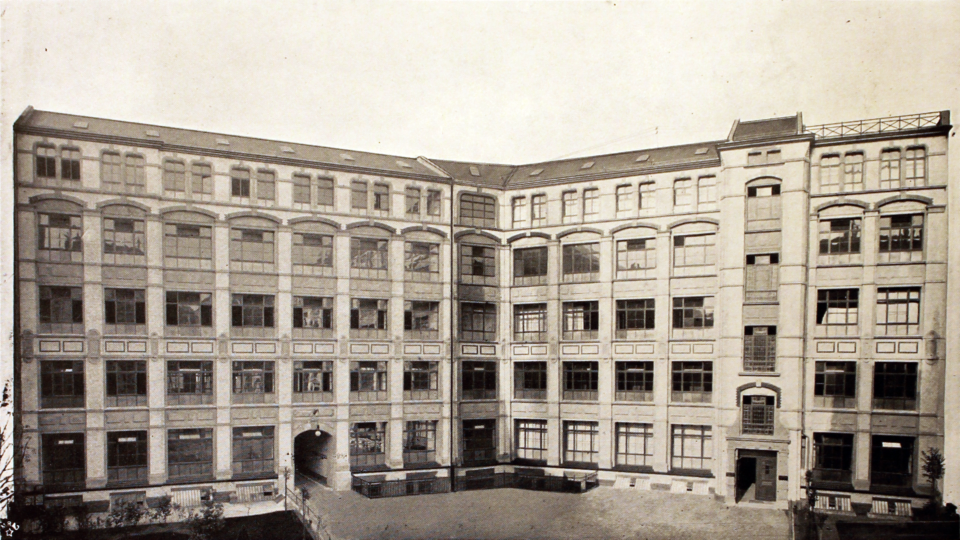 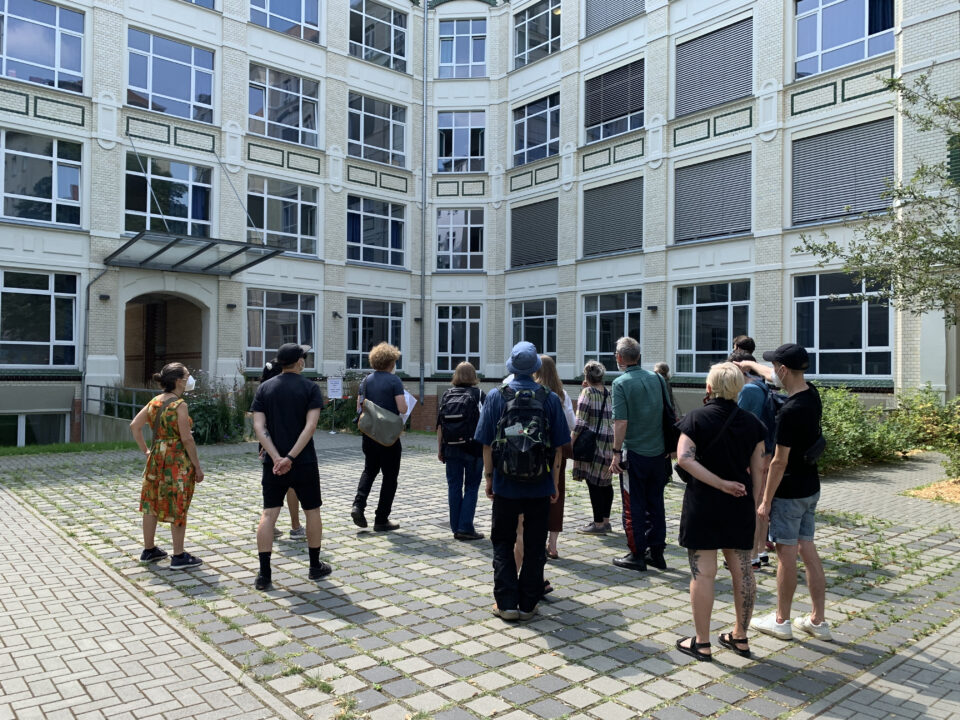 The typefoundry tour group inside the Gneisenaustraße 27 courtyard, with the former Gursch factory building in the background. Photo by Rob Keller.

In 1918 the Emil Gursch type foundry was taken over by a competitor – H. Berthold AG, whose headquarters were located just 500 meters away. Berthold contented to cast type in the former Gursch building until the 1940s. The company also moved its private printing office inside the former Gursch building, where the Berthold-Privatdrücke bibliophile series was produced. Between 1919 and 1943, it is possible that Berthold also printed its type specimens and product catalogs in the Gursch printing office. Those items will constitute a large part of the Open Access project. Although the former Gursch building was relatively spared during the Second World War, Berthold does not seem to have continued to use it in the post-war period. Today, the American educational non-profit CIEE uses the premises. The renovated factory building now houses classrooms and student housing.

Station 2: Gneisenaustraße 2, 2A and Mehringdamm 43

In and around the Mehringhof complex are three buildings either built for or used by the Berlin-based brass-rule manufacturer and typefoundry H. Berthold AG (1858–1993). The company was active on the site from 1869 when Hermann Berthold moved his company into the house at Mehringdamm 43 (then Belle-Alliance-Straße 88) until 1978. At the end of the 19th century, a large brick factory building was built in the inner court­yard. Although the factory building was badly damaged in World War II, the company rebuilt it almost entirely. Today you can only get onto the factory site from Gneisenaustraße. 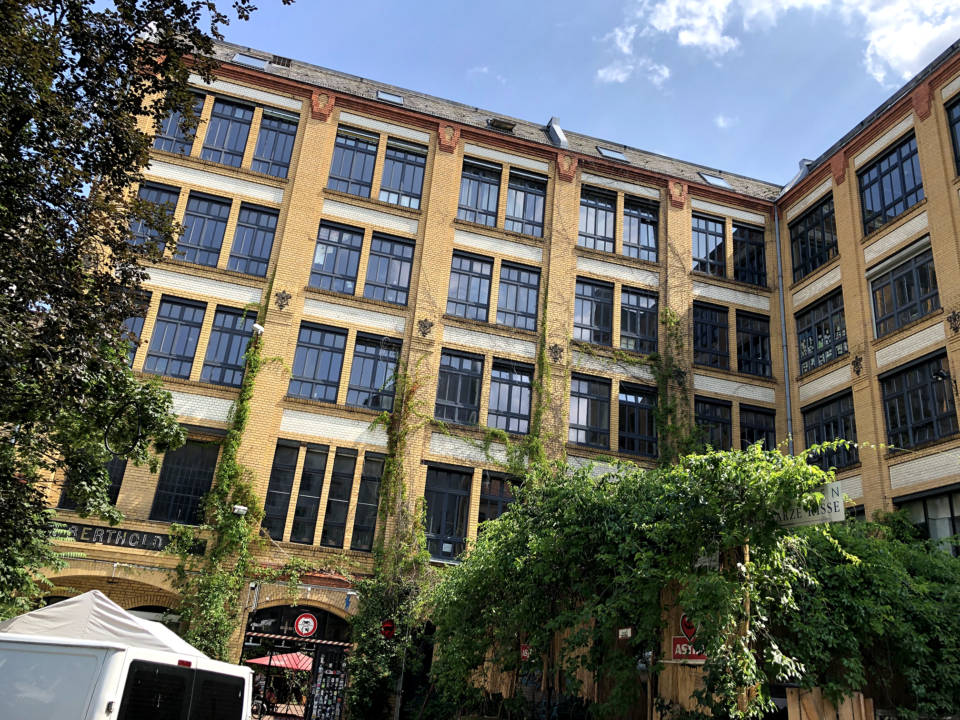 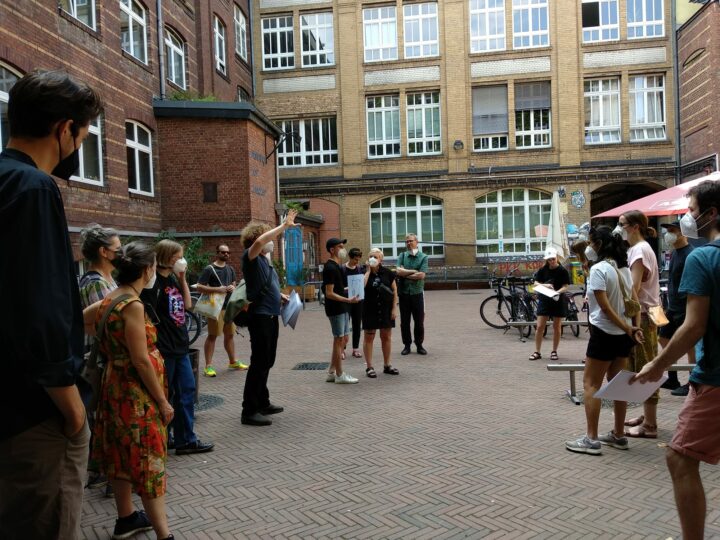 Typefoundry tour inside the Mehringhof courtyard. The background of the photo faces west. Photo by Kerstin Wallbach. 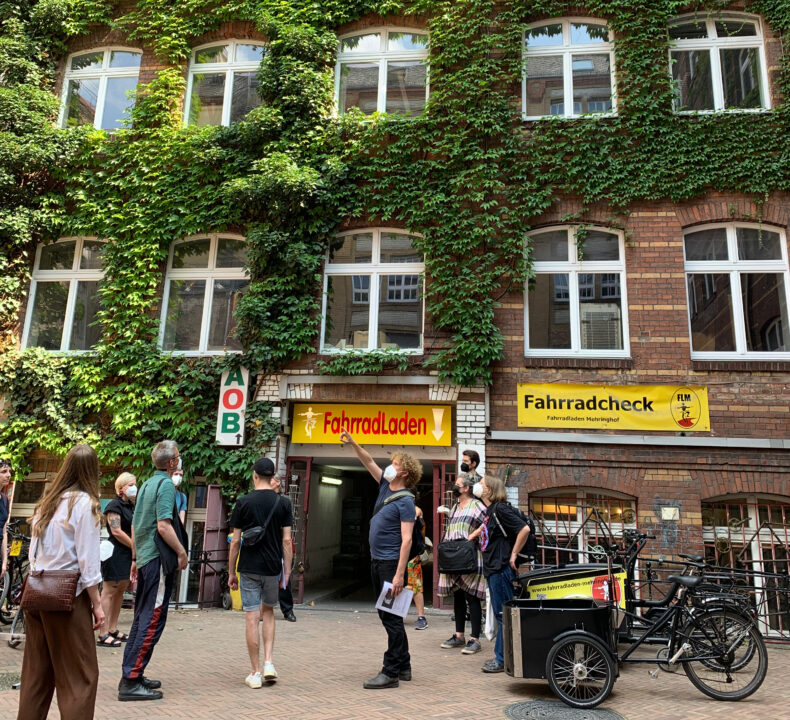 Looking east inside inside the Mehringhof courtyard, where ivy now covers part of an old Berthold factory wall. Photo by Rob Keller. 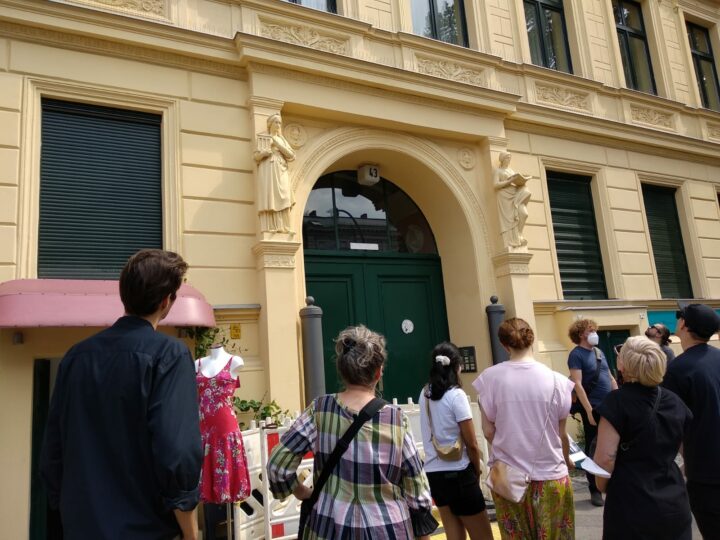 During the first half of the 20th century, Berthold had branches in Leipzig, Moscow, Riga, St. Petersburg, Stuttgart and Vienna – in addition to its Berlin buildings. In the 1920s, the company claimed it was the largest typefoundry in the world, which is certainly conceivable. Due to the printing industry’s transition to offset methods in the 1950s, H. Berthold AG slowly extricated itself from typefounding. In 1978, it stopped casting fonts of metal type altogether. However, from the 1960s onward, the company experienced a new boom, thanks to its photo-typesetting machinery. In the course of its phototype-era expansion, Berthold had the building at Gneisenaustraße 2 constructed. Although the 1971–72 addition was modern-looking at the time, it is now one of the less attractive structures on Gneisenaustraße. Shortly after completing the building ensemble, Berthold sold the plot and moved out of Kreuzberg into a Teltow factory. Many type specimens Berthold produced between the 1890s and 1951 will be digitized and republished as part of the Open Access project.

Once you are at the corner of Mehringdamm and Gneisenaustraße, Dudenstraße 10 is either a ten-minute walk to the south or a single stop away on the U6 line (just travel to Platz der Luftbrücke). The structure at Dudenstraße 10 was built in 1926. It was designed by the architect Max Taut, whose brother was also an architect: the modernist Bruno Taut. This Haus der Buchdrucker and is noteworthy for the brick lettering on its facade spelling out the words Verband der Deutsches Buchdrucker. The Verband der Deutsches Buchdrucker was an early German union founded in 1866 to organize printing-house compositors and typefoundry type casters. The union was a powerful force in the German printing industry until the Nazis dissolved it in 1933. Most type casters working in the Gursch and Berthold factories were probably members of the union. The union fought for better rights for its members and engaged in labor struggles. For instance, in a 1926 letter to the American printer Daniel Berkeley Updike, Stanley Morison mentioned that the 1925 type casters’ strike was delaying the delivery of an order of Original-Janson-Antiqua he had placed with D. Stempel AG in Frankfurt am Main. 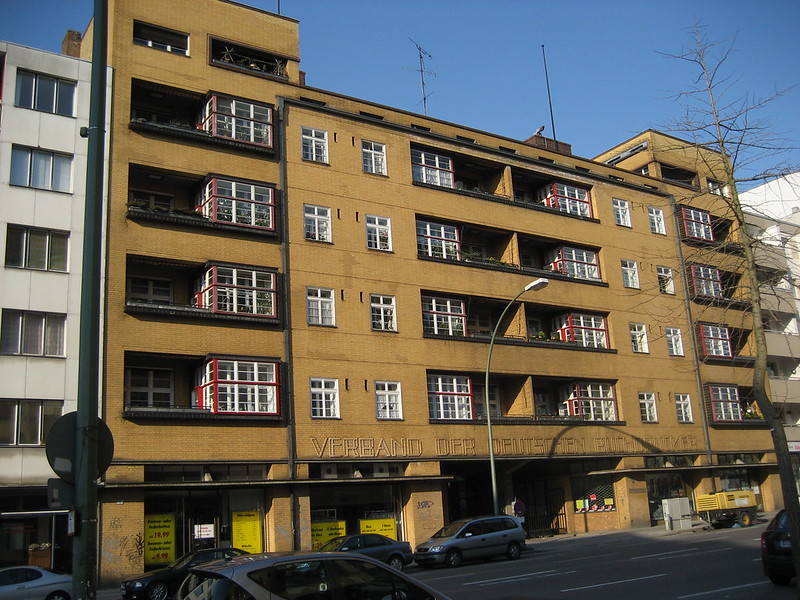 Ver.di, a successor of the union who still operates in part from the Haus der Buchdrucker, has a brief history of the building on its webpage.

To continue the typefoundry tour from the Bergmannkiez’s two surviving foundry buildings, take the U6 subway line to Ferdinand Theinhardt’s former house and foundry works at Linienstraße 144 (Oranien­burger Tor is only six stops away from Mehrin­gdamm). The townhouse at Linienstraße 144 was built in 1794 together with a side wing to its rear. In 1860, the building was purchased by the punchcutter and typefounder Ferdinand Theinhardt (1821–1906). In 1861, Theinhardt added a second wing behind the house, on the western side of what is now Linienstraße 144’s interior courtyard. He presumably lived in the front building with his family and moved the foundry he had established in 1849 into the building’s new wing. Today the house – one of the shortest on Linienstraße – is listed as a historic landmark. 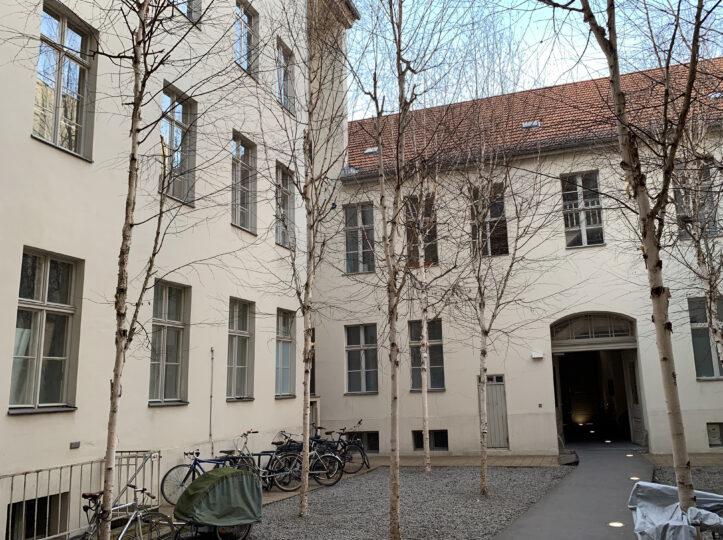 View of the Linienstraße 144 inner courtyard looking onto the western wing and the rear facade of the street-facing structure.

Although Ferdinand Theinhardt cut many blackletter types with his own hands – and certainly several roman faces, too – he was always best known for his academic typefaces. These include types for printing hieroglyphs, cuneiform, Roman inscriptions and Tibetan. Theinhardt sold his typefoundry to Oskar Mammen and the brothers Robert and Emil Mosig in 1885. The new owners never changed the name of the “Ferd. Theinhardt Schriftgiesserei.” About three years later, Ferdinand Theinhardt and his old typefoundry moved out of the Linienstraße 144 building.

In 1889, a new factory building was set up behind the existing Linienstraße 144 structures. Although this had nothing to do with the Ferd. Theinhardt typefoundry, other kinds of foundries did do business there. Signs were cast inside the factory until 1995. Today, there are offices and studios in the 1889 factory structure. In 1908, the Ferd. Theinhardt typefoundry – then based in Schöneberg – was taken over by H. Berthold AG. From 1910 until the 1930s, Theinhardt’s former company continued to work within Berthold’s main factory building inside what is now the Mehringhof. 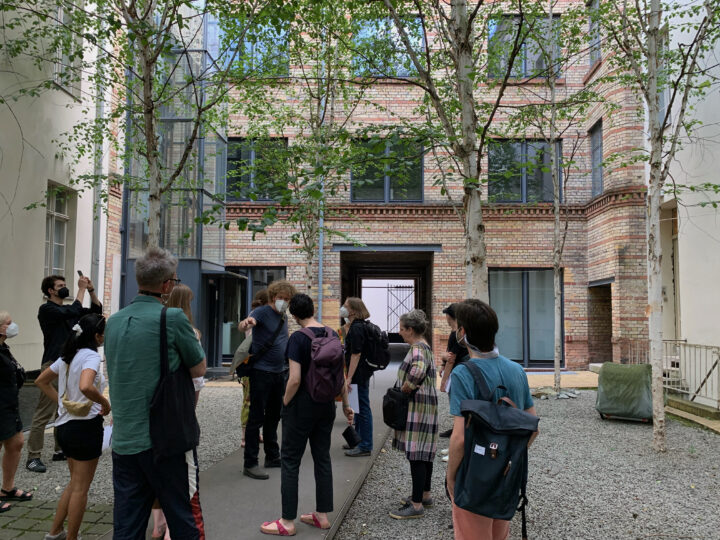 In this picture, you can see the other side of the Linienstraße 144 courtyard. In the background is the 1889 factory building, constructed after the Ferd. Theinhardt Schriftgießerei left this premises. On the left is the eastern wing build behind the front house in 1794. The right shows a bit of the western wing Ferdinand Theinhardt added behind the front house in 1861. Photo by Rob Keller.

It only takes a few minutes to get from Linien­straße to the new U5 subway line. With that, you can ride to the Weberwiese stop in Friedrichshain to complete the typefoundry tour. Alternatively, the M6 ​​tram goes from Torstrasse / U Oranien­burger Tor to Lands­berger Allee / Peters­burger Allee. Richard-Sorge-Straße 21A can be reached quickly from both the subway and tram stops. Again, our factory building is located in a courtyard. You can get in through a gate on the right-hand side of Richard-Sorge-Straße 22. Today the former factory building is called the Ernst-Lemmer-Haus and the Unionhilfswerk’s head office is inside it. The building is a historic landmark, constructed in 1896–97 as a candy, marzipan and chocolate factory. In 1926 the Norddeutsche Schriftgießerei moved in.

Left, a drawing of the Norddeutsche Schriftgießerei factory building reproduced in Die Handsatzletter (issue 8, 1975). Right, a 2018 photograph of the Ernst-Lemmer-Haus . 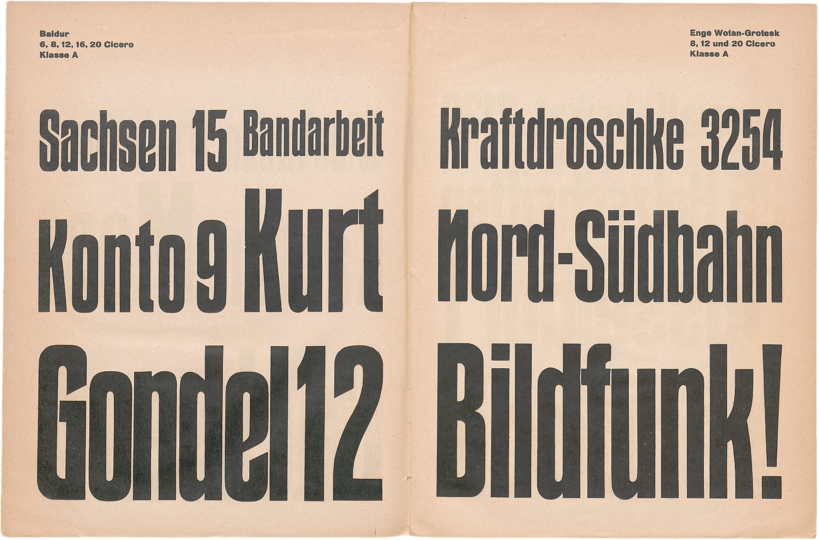 In 1960 the Norddeutsche Schriftgießerei was nationalized – just like the Wagner family’s Leipzig type foundry, Ludwig Wagner AG. Both companies were incorporated into VEB Typoart Dresden. Typoart used the building at Richard-Sorge-Straße 21A as its East Berlin location until 1982. Part of the matrix production for line-casting machines was carried out here. When the Berlin Wall was erected in 1961, five type casters employed at H. Berthold AG lived in the eastern part of the city. Berlin’s division made it impossible for them to continue working at Berthold, and they found work in the former Norddeutsche Schriftgießerei factory. However, Johannes Wagner remained a typefoundry owner: in 1954, he had brought some items over into West Berlin. Two years later, materials were taken further away, down to Ingolstadt in Bavaria. In 1965, the year that he died, the typefoundry relocated to Ingolstadt entirely. When Berthold ceased metal-type production in 1978, matrices for its typefaces went to Ingolstadt. The “Lettern-Service Ingolstadt” remained in business until 2002.

Our little walk has now also come to an end. Thank you very much for your interest and the company! 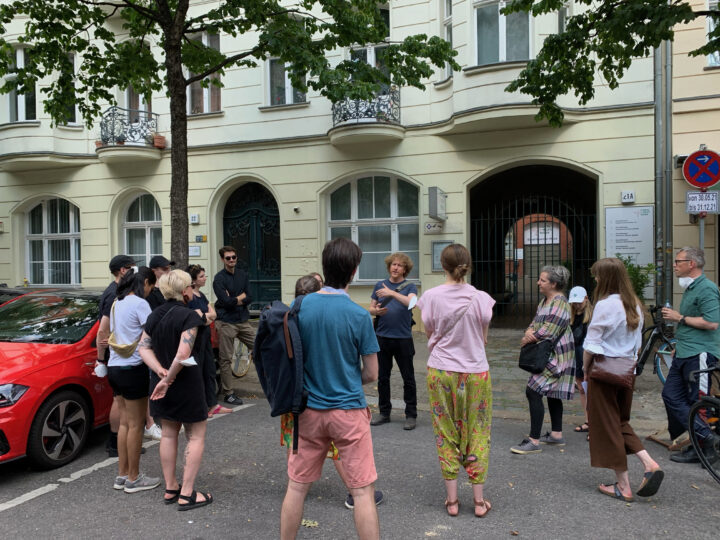 Typefoundry tour outside Richard-Sorge-Straße 22. A small part of the Ernst-Lemmer-Haus – which once housed the Norddeutsche Schriftgießerei and the Berlin branches of Johannes Wagner & Co. and VEB Typoart Dresden – is visible in the background. Look for the red bricks behind the metal gate. Photo by Rob Keller.

Back workshop, Ackerstraße 154: In the early 20th century, a small typefoundry named Kolland operated from this premises.

Mossehaus, Schützenstraße 18–25: Originally constructed in 1901 and renovated in 1921 – and again in the 1990s – this structure was built to house the printing operations for Rudolf Mosse’s newspapers. Mosse was one of the German branch of Mergenthaler Linotype’s significant clients. Several early German Linotype faces were produced at Mosse’s request (I suspect that these were all adaptations of existing foundry typefaces), as records from D. Stempel AG at the Haus für Industriekultur/Hessisches Landesmuseum Darmstadt, Abteilung Schriftguss, Satz und Druckverfahren attest to.

Bundesdruckerei, Kommandantenstraße 18: The current structure here is significantly different from those built for the Reichs­druckerei between 1879 and 1881. Nevertheless, some historical elements can still be seen inside the complex from the street. The Reichsdruckerei had its own typefoundry, which included a significant collection of original typefaces, as well as typefaces created at its predecessor firms, the Decker printing house and (probably) the Preußische Staatsdruckerei. The Reichs­druckerei also received the academic typefaces owned by the Royal-Prussian Academy of Sciences printing office. More details about the Reichsdruckerei’s typefaces are available on this site, in this post as well as in this follow-up.