The illustration above shows appearance of the H. Berthold AG factory in Berlin in 1909. Parts of that factory still stand today in the Mehringhof, a series of structures located behind the street-facing buildings at the intersection of Mehringdamm and Gneisenaustraße. The part of Berlin where this factory was located has been known as Kreuzberg since 1920, but the specific part of Kreuzberg described here had already been incorporated into Berlin in 1861. At the time when Berthold’s factory was being built, it went up in the then-southwestern part of Berlin known as Tempelhofer Vorstadt.

This article is the first in what will be a series of posts looking at the remains of various Berlin typefoundry factory buildings. I begin with H. Berthold AG because this building is so close to Monotype’s current Berlin office (formerly FontFont/FontShop AG). Because of that, many graphic designers, type designers, and typographers who live in Berlin, or have visited the city, already know about this topic.

Hermann Berthold (1831–1904) established an Institut für Galvano-Typie in 1858. A few years later, his firm began to manufacture brass printing rules. Indeed, it was for the quality of those products that Berthold made a name for himself within the German printing industry. Originally housed in the southern part of the Wilhelmstraße, near the north side of Berlin’s Landwehrkanal, Hermann Berthold’s company moved onto a plot of land south of the canal in 1869. The address of Berthold’s new plot, only about 750 meters away from their previous location, was Belle-Alliance-Straße 88. This is a bit confusing because – despite Berthold’s use of the address “Belle-Alliance-Straße 88” for decades – the factory was actually located behind an older street-facing building with the same address.

Today, that street-facing building – which I describe below – has the address Mehringdamm 43, and the former Berthold factory building’s address is now Gneisenaustraße 2A. The Belle-Alliance-Straße was renamed Mehringdamm after the Second World War, and the street’s buildings were also renumbered (“Belle Alliance” was a term used in the Prussian name for the Battle of Waterloo).

Between the 1860s and 1909, the H. Berthold company built up more and more portions of the factory shown in the illustration at the top of this post. Hermann Berthold himself retired from his business in 1888, and H. Berthold became an Aktiengesellschaft (a joint-stock corporation) in 1896. Remembered as a typefoundry today, H. Berthold only began casting and selling fonts of printers’ type in earnest after 1893, following their acquisition of the Gustav Reinhold typefoundry. Over the course of their history, H. Berthold AG had additional factories, too; these tended to be factories built by other typefoundries that Berthold then acquired. Before the first World War, for instance, Berthold had additional factories in Moscow, Riga, St. Petersburg, Stuttgart, and Vienna. They later had factories in Budapest and Leipzig. Much later, during e.g., the time when the firm was designing typefaces for phototypesetting, it had a design office in Taufkirchen near Munich. Although H. Berthold AG remained in business until the early 1990s, they stopped casting metal type in 1978 – that is also the year when they left these premises for space elsewhere in what was then called West Berlin (their new address would be Teltowkanalstraße 1–4 in Berlin-Steglitz).

In an article about the clustering of nineteenth-century typefoundries in one part of New York City, Tobias Frere-Jones writes that the businesses were located where they were in order to be close to the city’s newspaper publishers (their biggest customers), who in turn were located close to City Hall (about which they reported). When Hermann Berthold moved his firm in the 1860s, their new premises would have been further away from the city and royal governments, but still within an area of town favored by newspaper publishers, according to Bleilettern aus Kreuzberg erobern die Welt: Faschismus, Zwangsarbeit und die Schriftgießerei H. Berthold, pages 43–44.

I reproduced the illustration at the top of this post from Berthold’s 1921 company history, Das Haus Berthold, page 59. Curiously, the illustration as it appeared in that book is mirrored. I corrected the image digitally, so that it “looks” right. How do I know that it was “wrong” in Berthold’s history book? A more architecturally correct view of the factory is shown on the reverse of the title page in Berthold’s large 1911 Hauptprobe [complete type specimen catalog]; but also, as I have mentioned, parts of the structure still stand today (probably rebuilt, or at least repaired, after the damage they sustained from Allied bombing during the Second World War). In the illustration at the top of this post, some building façades feature windows that – as far as I can tell – never actually existed. Perhaps they were added onto the building’s rendering as a bit of artistic license. 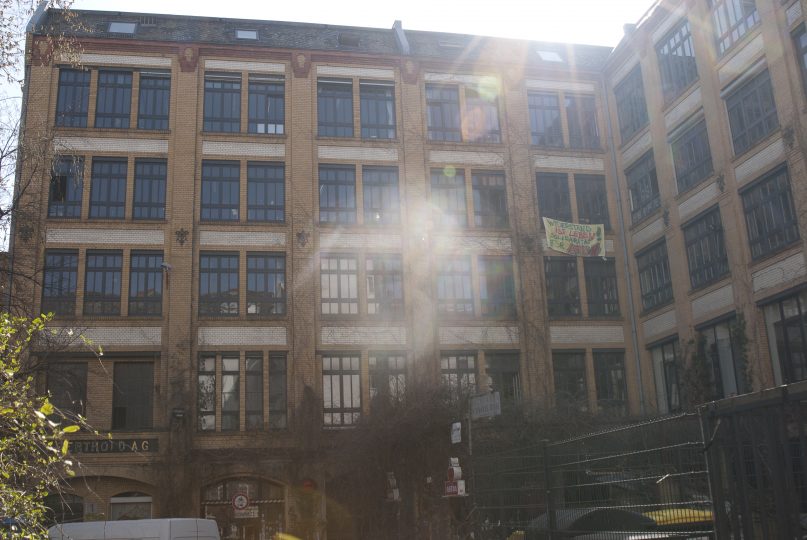 A photograph showing part of the façade of the old Berthold factory, 2018. 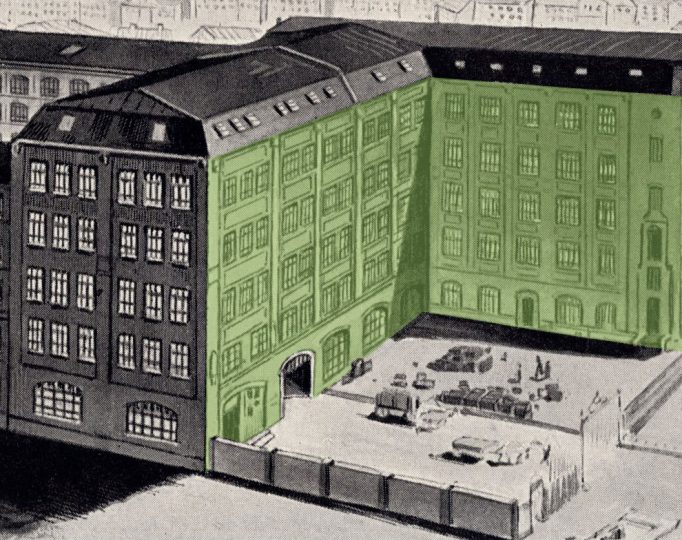 Cropped view of the illustration reproduced at the top of this post, with the façade from the above photograph highlighted in green.

In the decades since H. Berthold AG vacated their factory, the remaining structure has come to house a number of politically left-leaning social organisations. Berthold owned the property and the buildings; in 1979, they sold these to the Mehringhof organization for just 2 million German marks. One particularly noteworthy tenant in the Mehringhof today is the Schule für Erwachsenenbildung, an independent secondary school for adults. A few years ago, a group at the school began researching the use of slave labor in Berlin during the Second World War, and how Germany’s typefoundries used enslaved persons. The resulting exhibition gave an excellent overview of the history of typefounding in Germany during the first half of the twentieth century in general, and the study team also produced a catalog for the exhibition, which I can very much recommend. Part of that catalog presents a history of the Berthold company – particularly of H. Berthold AG in the first half of the twentieth century; this is the most-recent history of the foundry to have been published, and one of the most comprehensive, too. 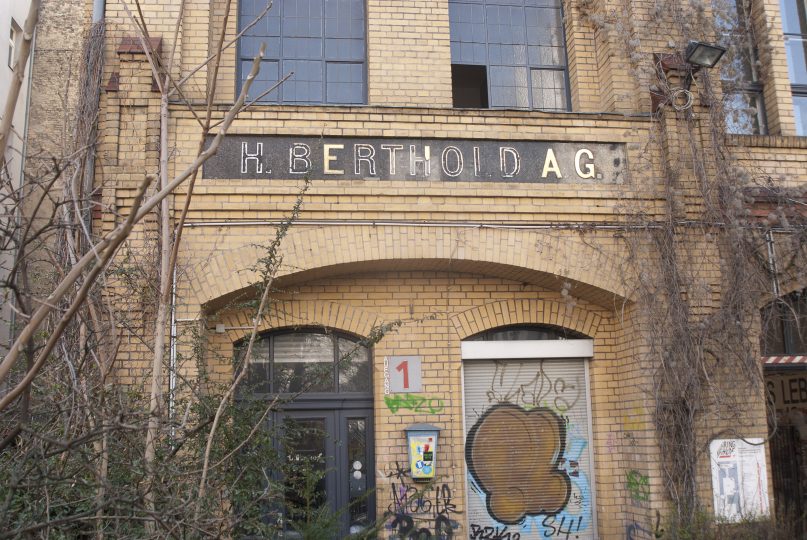 Aside from the old Berthold factory building itself, the most visually appealing part of today’s Mehringhof for those interested in the history of the foundry is the “H. Berthold A.G.” sign above Aufgang 1 [entrace 1]. Most of its letters have fallen off of the façade since the 1970s – or partially fallen off, in the case of the second H. 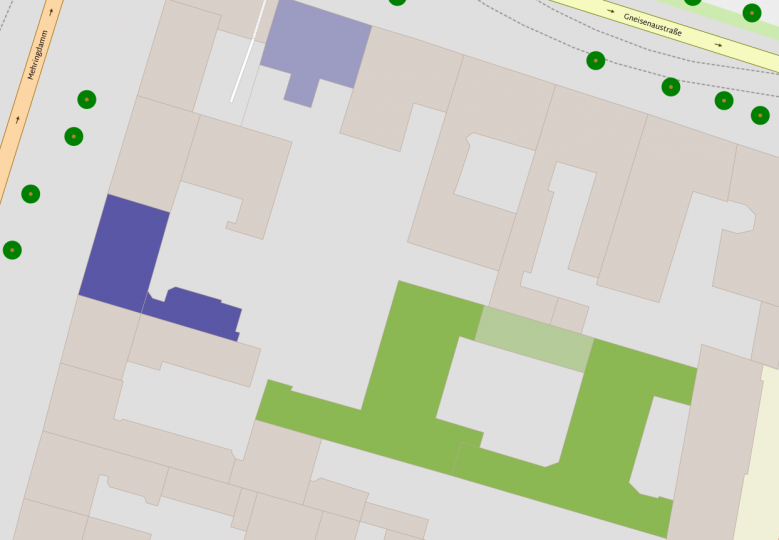 On the above areal plan of the buildings behind the southeastern corner of the intersection of Mehringdamm and Gneisenaustraße, I have highlighted the buildings I discuss in this post. The darker green shapes represents two neighboring structures that I believe are more-or-less remnants of Berthold’s pre-war factory. The lighter-green shape indicates a much shorter structure that, although it likely shares a footprint with part of Berthold’s pre-war factory, has not been as fully reconstructed. The dark-purple colored shape is Mehringdamm 43, a landmarked tenement building from 1859 that was not part of the Berthold factory, but was the structure through whose entrance one would probably have passed to enter or exit the factory itself. The light-purple colored building was built between September 1971 and June 1972; it was designed by the Berlin architect W. Albrecht and this is the building with the entrance you pass through to enter the Mehringhof complex today. I have not included a photograph of that building in this post, but you can see a picture of it on Flickr. © OpenStreetMap contributors. 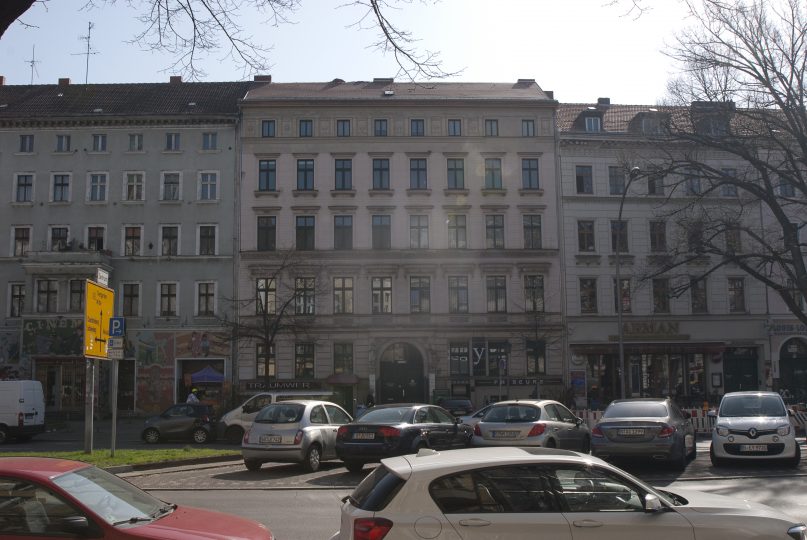 The structure that stands at Mehringdamm 43 today was not built by the Berthold company. It is a landmarked building constructed before Berthold moved onto the plot of land “behind” it. I write “behind” it because, today, one can only access the former Berthold factory via the Mehringhof entrance at Gneisenaustraße 2 – another building altogether, which is around the corner. That building was only constructed in 1971. Mehringdamm 43 was built as a tenement building, and today it still includes residential apartment units – in addition to units repurposed to serve as medical practices, etc. 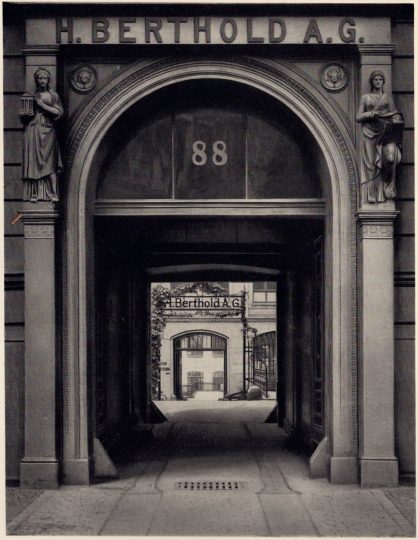 Photograph of the route to the H. Berthold AG factory through the entry way of the Belle-Alliance-Straße 88 (now Mehringdamm 43) tenement building, c.1921. From Das Haus Berthold, page 85. 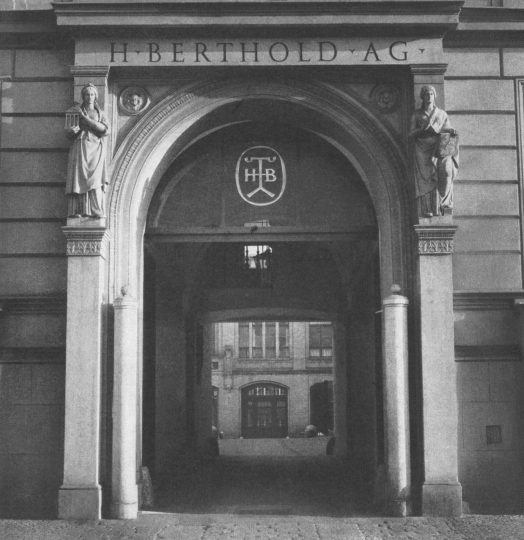 Photograph of the route to the H. Berthold AG factory through the entry way of the Mehringdamm 43 tenement building, c.1958. From 100 Jahre Berthold (no page numbers). Note that the raised sans serif letters from the c.1921 photograph have been replaced by incised roman capitals. The H. Berthold AG signet on the window underneath the arch was designed for the firm in 1941 by Herbert Post (1903–1978), who was one of the external type designers the firm collaborated with during the mid twentieth century. 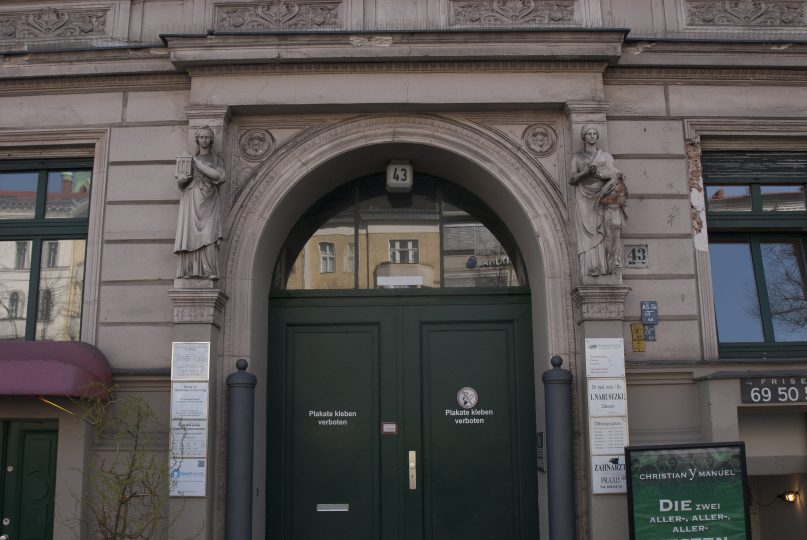 Today, there is no longer any inscription above the archway at Mehringdamm 43. Perhaps the incised letters spelling out “H. Berthold AG,” visible in the c.1958 photograph, have since been filled in with plaster and painted over.

A note on source material

My next post in this series will be about another surviving typefoundry building located just a few blocks to the east of Berthold’s factory: a location that housed the Emil Gursch typefoundry from 1901 until their acquisition by Berthold in 1918 (Berthold kept the typecasting machines running there until the 1940s). Today, the old Gursch building is home to American study abroad students (how the times do change…). Later instalments to this series will feature buildings used by Ferdinand Theinhardt’s foundry, as well as the Norddeutsche Schriftgießerei’s main building, and a park on the spot of the former Wilhelm Gronau foundry. Stay tuned!