This is another post related to the history of Akzidenz-Grotesk.

Contrary to Günther Gerhard Lange’s statement in a 2003 interview with Yvonne Schwemer-Scheddin in Typografische Monatsblätter, the Royal-Grotesk typeface was not a product Berlin’s H. Berthold AG acquired in 1908 when they purchased the Ferd. Theinhardt typefoundry. Instead, Royal-Grotesk had already been created at Berthold a few years earlier. The firm probably published it in late 1902, although some sources give 1903 as the year of its release, including [AfB] and [Wetzig].

As I did at the end of the previous paragraph, I’ve indicated below what the sources of my typeface names and date-attributions are, inside square brackets. Where copies of the sources are available online, those particular source names are links to online PDFs. Structure-wise, this may be a bit complicated, thanks to the linked and unlinked references. Still, the post comes in at less than 3,700 words, so it isn’t too long! At the bottom, you’ll find bibliographic details for each source mentioned.

What’s in a name?

I have read several twenty-first-century statements insisting that Royal-Grotesk’s connection to Ferdinand Theinhardt (1820–1906) is proven because the typeface name includes the term Royal. That is quite a leap, though! I’ve written more on why in this post’s next section. First, let me provide a summary of the history of the Theinhardt foundry’s ownership.

Ferdinand Theinhardt established a typefoundry in Berlin in 1849, when he was about 29-years old. Although Theinhardt and his wife had children, their son did not survive childhood. Their daughters, after they grew up, married military officers. This meant that Theinhardt had no heirs who could have eventually taken over his business. In 1885, he sold his foundry to Oskar Mammen and two brothers: Emil and Robert Mosig. At some point after that sale, Theinhardt became a retiree and ceased his punchcutting and typefounding activities. In my next post in this series, I’ll discuss the speculation about exactly when he retired and stopped cutting punches for good. At the time of the sale, he would have been over 65, and at least somewhat well off. Theinhardt died twenty-one years later, in 1906.

The new owners of the Ferd. Theinhardt business never changed the company name. I don’t know when Emil Mosig died, but by 1897, he was no longer involved with the foundry. By 1902, Mammen (1859–1945) most have left the company as well, as by that point he had been replaced as co-owner by Hans Schweitzer. Robert Mosig and Schweitzer ran the company together until 1907, when Robert Mosig would retire (and then die), leaving Schweitzer as sole owner. Schweitzer sold the company to Berthold in 1908.

Berthold operated the Theinhardt foundry as a subsidiary for the next two years. That in-and-of-itself was not uncommon; in 1897, Berthold acquired the Stuttgart and Düsseldorf-based Bauer & Co. foundry, which they kept open as an independent subsidiary until 1930 (just in Stuttgart). Berthold closed its Theinhardt subsidiary down earlier, in 1910 – at least as a business operating on separate premises. Technically, the re-organised “Ferd. Theinhardt G.m.b.H” that Berthold had set up in 1908 remained open into the 1930s. Yet after 1910, the subsidiary’s name was just another company doing businesses from Berthold’s main Berlin factory address.

While Ferdinand Theinhardt was at the helm of his company, it did work for at least Prussian state institutions:

Since Theinhardt’s foundry – and later Berthold – advertised those typefaces in their type specimen catalogues, I assume that these designs were not owned by the Royal Academy itself and that they were not exclusive to its members’ publications.

As the Royal-Grotesk typeface has the word “royal” in its name, some authors assume that this sans serif must have been produced for publications of the Royal Academy, too – despite the Academy’s name having used the adjective königlich instead of royal. A few of those authors state that, after Germany dissolved its monarchies in 1918, the Royal-Grotesk typeface was renamed Akzidenz-Grotesk, because monarchies were no longer popular in Germany. Their conclusion is incorrect on every front: Berthold had seven members in its Akzidenz-Grotesk family by 1917, and only one style called Royal-Grotesk. That single weight of Royal-Grotesk was not renamed Akzidenz-Grotesk mager (Akzidenz-Grotesk Light) until the 1950s. Additionally, many Germans continued to support the idea of a monarchy after 1918: until the Nazi seizure of power, there were indeed several German political parties and civic organisations that – to one degree or another – strove to restore a monarchy (just not necessarily one headed by the former king–emperor Wilhelm II or his son, the former crown prince also named Wilhelm).

Between 1871 and 1918, Germany was an empire, and its head of state was an emperor. Twenty-two of the twenty-six constituent states within the empire were monarchies, including Prussia, ruled by the Hohenzollern family (the imperial constitution saw it that the King of Prussia also held the imperial crown). Three other constituent states were headed by kings. Grand Dukes, Dukes, or Princes ruled in the other German states with monarchies. The empire also consisted of the Free Cities of Bremen, Lübeck, and Hamburg, which did not have local monarchs, as well as Alsace-Lorraine.

The following typefaces are those I have found so far that were published in Germany before 1918 and include the term “Royal” in their names:

What about “Accidenz,” “Akzidenz” and “Akzidenz-Grotesk” in typeface names?

While I’m on the subject of names, this would be a good place for me to stress how common the term “Accidenz” was in typeface naming during the late-nineteenth and early twentieth centuries. After about 1900, German spelling conventions changed, and Latinate words like Accidenzen – the German term for jobbing-printing, from the Latin accidentia – would be written as Akzidenzen instead.

Often in German typefounding, the term Accidenz was essentially used as an adjective. For example, the Leipzig-base typefoundry J.G. Schelter & Giesecke produced an opulent brochure to advertise its ornaments and border-printing elements in 1902 or 1904. This was titled Accidenz-Zierat und Buchschmuck (jobbing ornaments and book decorations). I am sure if the ornaments presented in that brochure were named “Accidenz-Zierrat” or not. More likely, those ornaments had no names at all. Printers would simply place orders for the ornaments they desired by using the ornaments’ respective product numbers, which are printed near each ornament in the brochure. 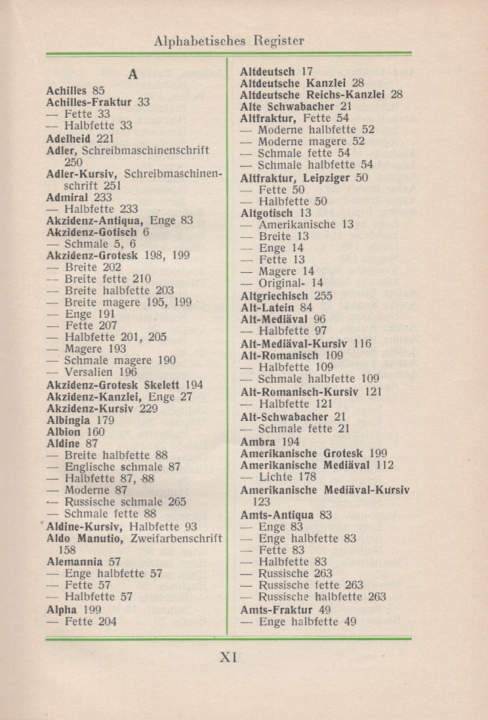 First page of the table of contents from Handbuch der Schriftarten, compiled by Emil Wetzig and published by the Albrecht Seemann Verlag in 1926. Not all the entries Akzidenz-Grotesk brings up on pages 190 through 207 are the now well-known design from H. Berthold AG. Although Wetzig’s handbook is not a thoroughly reliable source, its summary of the number of varying typefaces that contained the term “Akzidenz” in their name in 1926 is not inaccurate.

Here are the examples I have compiled so far. These only include fonts cast as foundry type or produced as line-casting machine matrices. Photo-typesetting and digital-font versions of Berthold’s Akzidenz-Grotesk are not included, for instance. My lists are alphabetical, not chronological. Know some more types that I am missing? Please let me know!

Single-style typefaces that are not sans serif:

Wilhelm Woellmer’s Accidenz-Cursiv – not a sans serif, but available in more than one style, so it gets a unique entry here:

H. Berthold AG’s Accidenz-Grotesk styles. During the First World War, or shortly thereafter, these names’ spelling changed to Akzidenz-Grotesk. The styles were initially distributed by H. Berthold AG in Berlin together with its Stuttgart-based subsidiary Bauer & Co.:

C. Kloberg’s Accidenz-Mediaeval Kursiv – also not a sans serif, but available in more than one style: