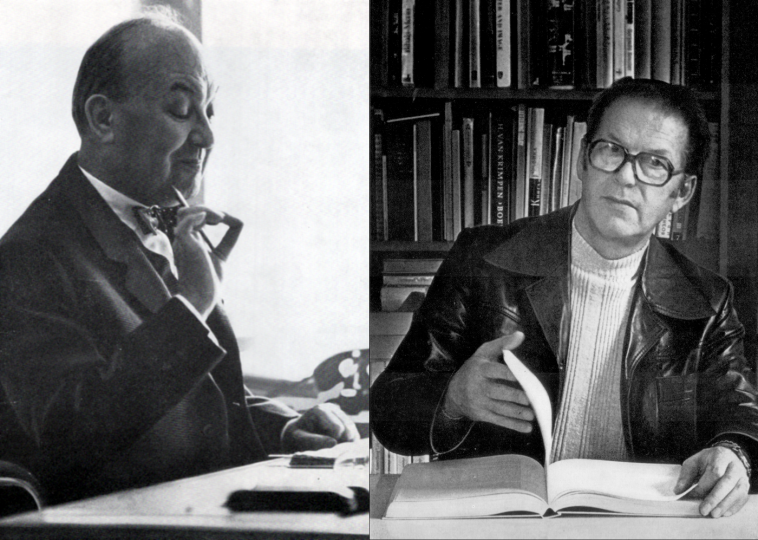 If you read Jost Hochuli’s 2016 Tschichold in St. Gallen: Jan Tschichold’s reference library in the Vadiana Cantonal Library St. Gallen, you’ll come across one of my favourite anecdotes about Jan Tschichold:

Of particular interest are the sometimes lengthy letters attached to some of the publications, as either originals or copies, as for example, Albert Kapr’s large-format book Schriftkunst. On two A4 sheets, Tschichold points out to the author 26 places where improvement was required for the next edition. The corrigenda list also contains the comment: ‘In general: book titles never in quotes, but in italic with no quotes.’ The accompanying letter contains the following: ‘I did not want […] to delay the long-promised correction any further, so I’ve done it now. It was a lot of work. So, I would ask you to mention me in the new foreword, and to have me sent a copy of the new edition when it is published.’ Tschichold had a healthy ego, and did not suffer from an inferiority complex. (In a letter to me dated 12 November 1971, he wrote of the same book that it was riddled with mistakes, containing ‘at least 100 [!]. I don’t mean minor matters. It was done far too quickly.’)

This text is on pages 31 and 32 of the book. The English translation is by Charles Whitehouse. The book was published by VGS St. Gallen, with the Wallstein-Verlag in Göttingen.

Although Kapr’s Schriftkunst seems to be an outgrowth of his earlier Deutsche Schriftkunst from 1955, which had 282 pages, to Schriftkunst’s 474 (at least in my third-edition copy, from 1983), it may well have not been the most pressing item on Kapr’s agenda, given how busy he must have been during the 1960s and ’70s. Kapr, it seems, got ‘blue penciled.’

Kapr must have implemented at least some of Tschichold’s corrections, and he did name Tschichold in the short 40-odd word addition to the book’s foreword in its second and third editions. Here is my translation of his note from those forewords: ‘The second and third editions gave the opportunity to cover new developments, but the overall structure of the book did not change. For a range of substantial leads I would like to especially thank Mr. Jan Tschichold.’

I will insist on using the term ‘blue pencil’ for this sort of thing indefinitely, because of Paul Shaw’s excellent blog Blue Pencil, now part of his website. Why the name? When Paul began the blog in 2008, he wrote that ‘I chose the name Blue Pencil for the blog because my original intention in establishing it was to post lists of errors—factual, orthographical, typographical, etc.—I have been increasingly finding in the various books I read. Many publishers have abdicated their responsibility to properly edit and proofread the books they issue. Since they are unwilling to take on these essential tasks, Blue Pencil will do it for them—post facto.’