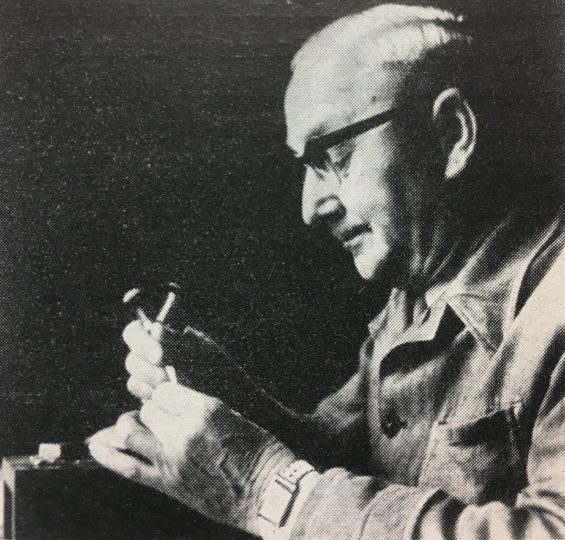 The portrait of Otto Erler reproduced above shows him at work, perhaps inside the HGB Leipzig. It accompanied his obituary. The photograph is credited to “Jonsong, Leipzig” and appeared alongside Albert Kapr’s “Personelle Nachrichten – Meister Erler verstorben” in Papier und Druck (issue 11, 1965, p. 87).

This pot is a 2,700-word article on the Leipzig punchcutter Otto Erler (1890–1965), whose career began before the First Word War and lasted all the way through to his death. For decades, he ran the punchcutting department at Schelter & Giesecke, one of the largest twentieth-century German typefoundries – and probably one of the world’s largest, too. German punchcutters are woefully under-written about; this article does little to change that, but I hope it serves as a good start. Erler was a committed Communist, and he was instrumental after 1945 in the establishment of VEB Typoart Dresden, the state-owned typefoundry of the former East Germany. Read all the way to the end of this post to learn about Erler’s post-retirement work at the HGB Leipzig, a German art and design academy still in operation today.

John A. Lane’s excellent 1991 article “Twentieth-Century Punchcutters” includes short profiles of several individuals who worked as such – or who at least cut punches for a font of type – between 1900 and 1990.[1] He covers Harry Carter, Matthew Carter, Henk Drost, Gustav Eichenauer, George Friend, Louis Gauthier, Victor Hammer, Louis Hoell, Paul Koch, Rudolf Koch, Charles Malin, R. Hunter Middleton, Stan Nelson, Christian Paput, Charles Plumet, Edward Prince, Paul Helmuth Rädisch, August Rosenberger, and Edmund Thiele. Despite the number of individuals included, Lane’s text does not address every significant typographic punchcutter of the century. He does not include Egon Graf, for example, who cut many of Georg Trump’s typefaces. While Lane does mention Otto Erler in passing, he is not given a multi-page profile. Erler’s career was as long, or longer, as those of the other individuals Lane profiled. Yet much of it unfolded behind the Iron Curtain. Presumably written while Socialist regimes across Eastern Europe were collapsing, Lane may not have had much concrete information about Erler at his disposal. Otto Erler was a punchcutter and the head of the engraving department at the large typefoundry of Schelter & Giesecke in Leipzig, and then at VEB Polygraph and VEB Typoart, from the 1920s through the 1950s.

Erler’s career overlaps with Paul Helmuth Rädisch’s almost exactly: Rädisch, born in Leipzig a year after Erler, began his engraving apprenticeship at Paul Schwieger’s punchcuttery around the same time that Erler’s own apprenticeship (at another firm) would have started. While Erler would more-or-less remain in Leipzig, Rädisch spent most of his life and career in the Netherlands, at Enschedé in Haarlem. Both men retired in 1957. Rädisch is well known among type designers and typographers for having cut the punches for Jan van Krimpen’s typefaces. I believe that Erler’s collaboration with e.g., Herbert Thannhaeuser and Albert Kapr should be discussed to the same degree. I have assembled some notes about Erler’s career here.

A chronicle of Erler’s professional experiences

Born on 8 November 1890, Otto Erler lived to be 74, dying on 21 September 1965.[2] He spent most of his life in Leipzig, where he both was born and died. According to Albert Kapr’s 1965 obituary for Erler,[3] as well as information in the 2010 book One Century of Type and Teaching Typefaces in Leipzig, a basic chronology of Erler’s work experience would look something like this:

According to Typoart’s 1988 chronicle, the Erler-Versalien – or “Erler Titling” – was published in December 1956.[5] More likely, this typeface came onto the market in 1952 or 1953. Erler had engraved steel punches for at least one size of this product by hand; photographs of five of the steel punches accompany a 1955 issue of the East German Papier und Druck magazine.[6] The design of the Erler-Versalien came from Herbert Thannhaeuser, who was then Typoart’s artistic director. In 1952 issues of Papier und Druck, the Erler-Versalien were presented as a titling face that Thannhaeuser designed to accompany his Meister-Antiqua, Meister-Kursiv, and Meister-Ornamente types.

On the back of an undated, 10-page Typoart specimen brochure printed at some point in the early 1950s, an illustration of Erler at work on the Erler-Versalien was featured. The text underneath the illustration reads: “Master Erler at work on a new titling face, all of whose sizes will be hand cut, following drawings from Herbert Thannhaeuser. Handcutting is the given method for preserving the individual life of a beautiful form, that makes the drawing so appealing. We consider it our task to cultivate the craftsmanship of manual punchcutting and to put it to the service of graphic arts.”[7] The illustrated portrait also accompanies a 1960 article by Thannhaeuser, entitled “Lob des Schriftschneiders” [in praise of the punchcutter], which appeared in the magazine Papier und Druck, and which is reproduced below.[8]

As far as I know, Typoart’s naming of a typeface after its (still-living) punchcutter, rather than its designer, was unique in twentieth-century German typefounding. Gebr. Klingspor, for instance, never published an “Eichenauer-Fraktur,” nor the Bauersche Gießerei a “Hoell-Antiqua.” Even Hermann Zapf, who often praised the D. Stempel AG punchcutter August Rosenberger – the man who had cut most of his early work – never published a typeface that was named in his honour. I suspect that the Erler-Versalien were named after Erler because Typoart’s long-time punchcutter was nearing retirement, and this was seen as a nice gesture. Indeed, something similar happened a half-century later at Linotype, when they published a digital typeface named Linotype Gianotten in 1999.[9] Because of his status as a skilled industrial worker, and his prior membership in the German Communist Party, Otto Erler had been involved in the direction of Typoart and its predecessor companies since the Soviet takeover of what eventually became the German Democratic Republic (GDR) after the end of the Second World War. He must have been exactly the kind of individual that the young GDR wanted to celebrate. In other words, aside from the collegiality of naming a typeface after Erler, Typoart would also likely have had ideological motivations to do so. Otto Erler and the establishment of VEB Typoart Dresden

Otto Erler was mentioned several times in Typoart’s 1988 chronicle, Die Entwicklung des Betriebes Typoart in Fakten und Daten 1945–1985. I have translated each of the four instances into English below:

As the head of several typefoundry punchcutting departments, Erler would very likely have been involved in the training of punchcutting apprentices. In his obituary for Erler, Kapr wrote that “a considerable number of young punchcutters were trained by a specialist who was almost second to none in all of Germany. And what not only his apprentices, but all colleagues, co-workers and students could learn from him, was his professional enthusiasm and his love of work, which brought him the highest satisfaction.”[14]

In their 2010 history of type design education at the Leipzig Academy, Julia Blume and Fred Smeijers write that, in the 1950s, “the [Institut für Buchgestaltung] turned into a typography laboratory; a change of direction which could only be realised through the active involvement of Otto Erler, who put his skills as a punchcutter into the service of the Academy from 1957, when he retired from Typoart, until the mid-1960s [when he died]. With his help, at least one set of templates of a new typeface in one or two sizes could be realised as prototypes and test printed each year. [In 1962] Kapr described the details of Erler’s contribution as follows: ‘He devotes circa 40% of his work capacity to the Chinese student Yu Bing-nan, who is developing a new typeface from the People’s Republic of China. About 10% of his capacity goes to the support of students working on new typefaces: the research student Heinz Schumann, Volkmar Brandt, who is preparing his diploma, and Hildegard Korger. The remainder of his time is used to assist in the typeface designs of Professor Kapr and the Academy graduate Gert Wunderlich, whose designs had been given awards in the recent competition and are now being prepared for typesetting by the department.’”[15]

A statement about Erler’s role at the HGB on the next page of One Century of Type and Teaching Typefaces in Leipzig, on the other hand, is not entirely accurate (in my opinion). When Blume and Smeijers write that, “in collaboration with Erler, the entire process from the early design stages to the trial cuts became understandable for the students,”[16] I believe that they are correct. Nevertheless, the following statement that this “was perhaps the first time ever that the knowledge of new typefaces was taught to such a degree at an Art Academy, since type foundries had previously treated their specialist experience in the field of typeface manufacturing mostly as trade secrets” cannot be true.[17] At the Leipzig Academy itself, the engraver Georg Schiller had taught from 1905 until 1920; from 1910, he was their professor for Stempelschnitt, Graveur und Prägedruck [punchcutting, engraving, and embossing]. According to Schiller himself, typographic punchcutting was one of the four areas of his instruction there.[18] In London, the punchcutter Edward Prince regularly taught a “continuing education” punchcutting course at the Central School from September 1914 until some point in 1920, when he became too ill to continue (he died in 1923).[19] Erler was not teaching typographic punchcutting to HGB students, as Prince had done in London, or Schiller may have done – to a certain extent, at least – in Leipzig. Erler’s collaboration with HGB students, graduates, and teachers was surely helpful to their understanding of type design and type production, and while it must have helped them prepare better designs, punchcutting as a professional activity was not taught by Erler at the Academy, but was rather something for apprentice workers to learn.[20] Nevertheless, Erler’s engagement at the HGB was quite unique. It allowed the typefaces designed there to be realised as actual fonts of printing types, in what was likely the first time anywhere in a higher-education setting that this had happened.

From Offenbach to London: Berthold Wolpe’s Monotype typefaces and the new Berthold Wolpe Collection from Monotype Previous Article
The 1869–1978 headquarters of Berthold today Next Article