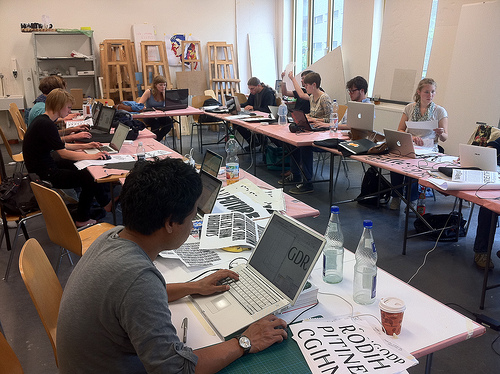 From May 9–13, 2011, I took a week’s vacation to conduct a type design workshop at the Burg Giebichenstein Kunsthochschule in Halle. It was an honor to be invited, and I was glad to go. A number of friends of acquaintances of mine have studied design in Halle, like Nina Stössinger and Roman Wilhelm. Both Alessio Leonardi and Severin Wücher taught at the school recently. The school has a long typographic tradition: Herbert Post, one of Rudolf Koch’s Offenbach students, joined the school’s staff in 1926; he remained in Halle until fleeing from the GDR to West, in 1950. The workshop was made possible by Andrea Tinnes, professor for lettering and typography in Halle. It was Andrea who invited me the school, showed me around Halle, and planned out the week perfectly. I couldn’t have imagined a better short teaching experience.

My goal was was to tie into the Halle tradition a little bit with my workshop. I have it the title, Schriftgestaltung anfangen!, which means something like, “start designing type!” However, I was pleased to see that several of the students already begun just doing that earlier on in the studies, and so had some interesting experience with type design, calligraphy, or lettering. Before the week began, I emailed all of the participants, and asked them to go out into the streets of Halle and make photos of signage lettering. They should especially focus on older signs – be they painted, made of neon, cut out of metal, or carved into stone. The older the sign, the less likely it was to be based on a specific printing typeface.

On the workshop’s first morning, the students picked their favorite images. Over the course of the week, students vectorized these letters in FontLab Studio, FontStruct, or Illustrator. Then they drew additional letters, to match the outlines they already had. While very few students in the class had much prior experience with FontLab Studio, almost everyone was using it by the end of the week. Some students learned in the in’s and out’s of the program faster than I thought possible. Halle sits in a unique location, about 90 minutes from Berlin and 30 minutes from Leipzig. Although the city itself is picturesque – full of students, low-cost living, and excellent beer – several of the workshop participants had already moved to Berlin or Leipzig, and commuted to Halle when necessary. Like Leipzig, much of Halle has been renovated since German reunification; the central parts of the city feel rather new and lively. The students at the Burg are spread out across town. The communication design department is grouped together with a few similar fields of study on the impressive Neuwerk campus, situated on the bank of a tributary of the river Saale. The Neuwerk campus seems like it must be a hamlet of a place to study, with an attractive crop of buildings vaguely grouped together around a cafeteria courtyard. There is even a campus bar inside of main building.

Some of the student work from the workshop appears below, as well as a few photos of our classroom itself.